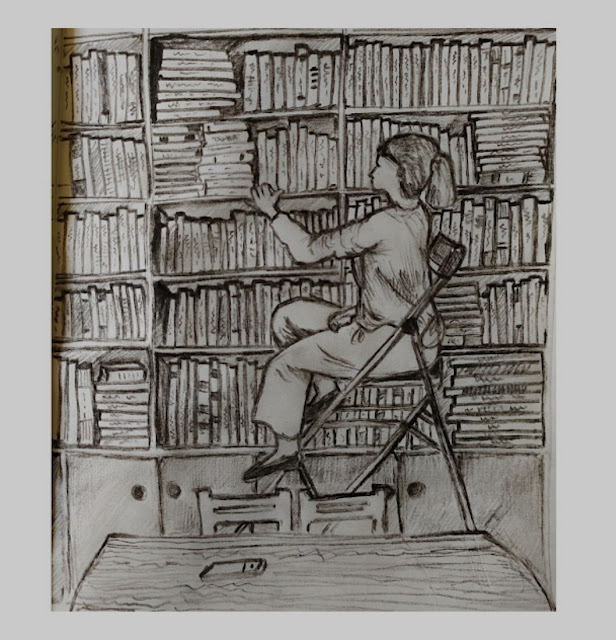 In the train, Keimoni preferred to read a book to a newspaper, and not only because the size was practical. The paper didn’t hold her attention enough, and above all, it didn’t take her out of the present. The ride every day to work let her do the amount of reading she liked to take in at one time. She liked to read at home, at night, but other things. Keimoni read several books at once, each with a time and place, taking her out of the place and time in which she lived.

She disappeared into books like someone running into the forest, emerging from the other side, always a bit changed from the experience of crossing over. These vanishing acts were a staple for all periods of waiting. In trains, busses, cabs, restaurants, park benches, offices. It did not matter if she was sloshed between sweaty arms of strangers in the train whose faces were less than two inches from hers. It did not matter if the light was too low or the seat already taken or if a hundred infants were screaming at the top of their lungs. The possibilities of a world built up from mere twenty-six letters and a handful of punctuation marks had the power to obliterate the impossibilities of life around her. It was there, Keimoni communicated with the dead, visited exotic places and learnt lessons from those who are no longer with us – stories older than most countries that have outlasted the cultures and the buildings in which they were first told.

Keimoni didn’t mind reading in quiet places, but it was within a crowd where she found the activity most enjoyable. Despite the crush and the noise – she didn’t mind diving in. She loved the crowd as she loved the sea. Not to be engulfed by or lost in it – but to sail it like a solitary pirate led by the compass of her books, seeming to follow its rhythm, but finding her own when the current broke or dissipated.
About Project Other Names