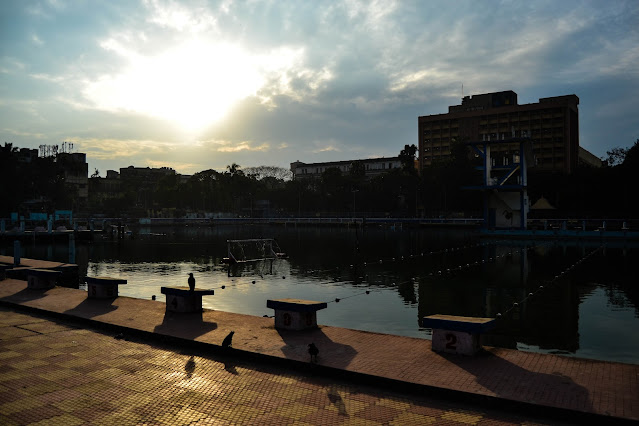 She sat on a wooden bench facing an empty communal pool, contemplating its green chlorinated waters, with her hand resting on the silver handle of her cane and thinking about death. The first time Mrs. Ghosh had visited Dolphin Square, she was no more than five herself. Her father, a district magistrate in the Calcutta high court and a skilled swimmer himself had unceremoniously doused her in the pool. It was the first of many days that would become her entire adolescent years.

The pool was emptied and cleaned once every year in the winter. There had been numerous deaths at the bottom of the diving board but all of Calcutta’s best swimmers frolicked to the murky green pools to compete with children from nearby slums who inevitably turned out to be stronger and swifter in the district championships. Every second Sunday of the month, young people who couldn’t afford the membership fee of the government run swim club, competed against each other to earn their place by merit. It afforded them free training and a daily ration of one hard-boiled egg and five ladles of sprouts seasoned with lemon and salt. Medals, shields, and certificates had lined the office of the club and to everyone’s embarrassment the communal pond masquerading as a pool became the city’s most reputed. Seventy years later, only the green chlorinated water looked familiar to Mrs. Ghosh.

The clubhouse was an abandoned shell held together by the fig tree whose roots snaked around its frame. The carts selling chickpeas and groundnuts were gone. All the trees looked different as though time had shuffled them around the square in a game of musical chairs. The pool had become a pond where poor people came to do their daily ablutions. Such ruinous things time does to life and the world.

Mrs. Ghosh felt restless. She looked at her watch - no one would expect her back for another hour but she pressed down on the silver handle and steadied herself with both hands. Even though she was not allowed to have coffee anymore she made her way to the coffee shop that had recently opened up in Dolphin Square. Mrs. Ghosh never missed her evening walks anymore. The coffee did not make her feel better, but neither did she feel worse, at least for the time being which wouldn’t be too long now. She drank the dark liquid with no milk and no sugar, contemplating the green chlorinated water and thinking about death.