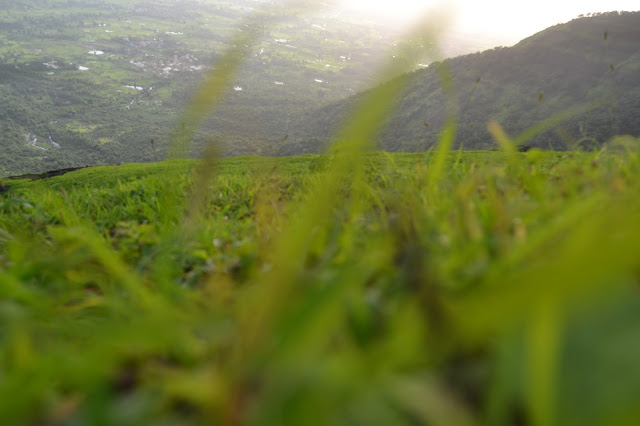 People have different adjectives for it; extreme travel, adventure, cross-country, camping... but the idea remains the same. Holidays that inject freshness, takes you someplace unusual, making you do things that you wouldn’t be normally be doing. While it’s easy to talk and romanticise such escapades, walking the talk is a different story all together. In fact it took me eight months out of last year to take my first baby step towards the lesser trodden path. To be more specific, to Prabalgad.


May be you work out every day, may be you’re a regular trekker of sorts, may be you’re into that sort of high octane travel; in that case Prabalgad might prove to be real easy-peasy. But for the rest of us, lazy bones out there, it is a good route to test the uncharted waters.

Before we get down to the nitty-gritties of the trek, a general overlay of the place is in order. Located between the Matheran hills and Panvel, Prabalgad stands at a shallow 2300ft above sea level on the Prabal plateau. Easily spotted from the Mumbai-Pune expressway, the trail for Prabalgad begins at the base village of Thakurwadi, an odd 30 kms from the Panvel local station. During most of the year the plateau remains an arid, dusty, cacti-infested terrain. Then rain comes and paints the hills in all shades of green; like a carpet of dense moss over the stout Sahyadris. The best time of the year to visit is between August and December at the latest. 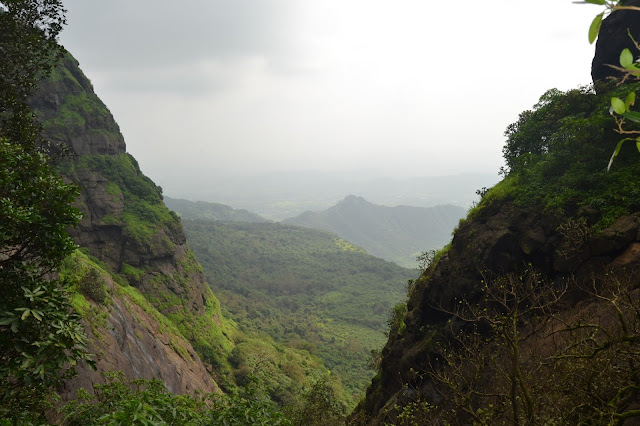 Now that you know how to get around to reaching Prabalgad, we’ll get right into where we were. The trek.

It was bang in the middle of the week, on an uneventful Wednesday in August. Prematurely we had packed a bottle of wine and some ham sandwiches to make a picnic out of the whole trip. I had been harbouring visions of sprawling out on the grass staring into the infinite horizon of nameless hamlets at the foot of the Sahyadris. And in my dreamy whereabouts I lost track of time and ended up at the base village of Thakurwadi at the peak sunny hour of 11.30am. Time was not our side from the beginning. 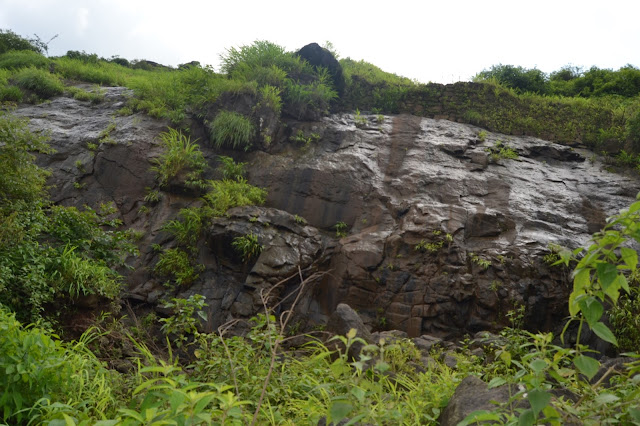 From here the trek plays out in two distinct stretches – Thakurwadi to Prabalmachi and then Prabalmachi to Prabalgad. The first half of the trail; from Thakurwadi to Prabalmachi has a clear path to follow with a steady incline lacing in spirals around the plateau. But on a hot sunny day, the first half of the route can sap you of energy since there’s little to no shade for the entire climb. However if you keep your eye out, the route is littered with sharp pagdandis cutting through the curtain of trees from one incline to the above. These shortcuts can save you nearly twenty minutes of brisk walking along the muddy trail. At our own perils we tunnelled through quite a few, sometime on all our fours scrambling through disbanded roots and branches.

The Middle
Have you ever tried running a half-marathon on a whim? Well, that’s how I felt. A body that’s used to resting on its ass found itself in a strange postural feat climbing the five odd kilometres. The first hour we made good way. Climbing and persisting the sun’s sweltering gaze upon us. 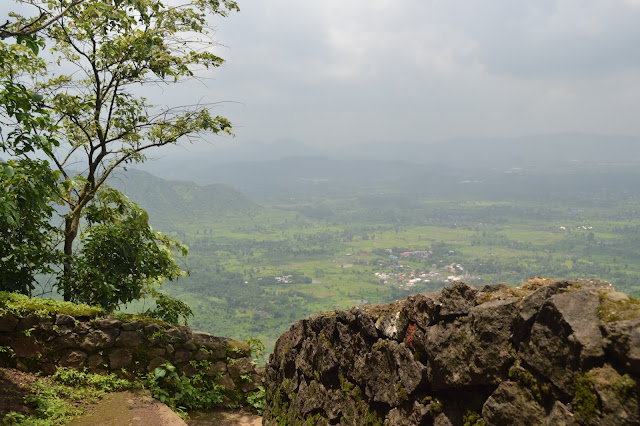 After an hour of climbing my breath began to falter. ‘Wait’, I cried. ‘Not so fast’. Often I sank to my knees with a horrible gasping sound whooshing out of my lungs. I’d say the test of any trek is in the middle part. The only sweetener though is the changing view from rising inclines. And the trail to Prabalgad doesn’t disappoint either. The lush landscape, hopped up on an overdose of chlorophyll stretch out like a shiny green carpet over the rugged plateau. As you get higher, the scenery remains the same, only adding more horizons to your view.

The trek from Prabalmachi gets relatively trickier than the first half. Already sapped of my energy, my lungs pounded an erratic drum beat in my head as I willed one foot in front of another. Climbing over shaky boulders with unruly vines and roots snaking along its sides, the poorly marked trail (look out for the faint white arrows on tree trunks and rocks) will keep you alert at all times. Every once in a while a sturdy looking boulder revealed itself to be a wobbly seesaw, throwing me off balance. 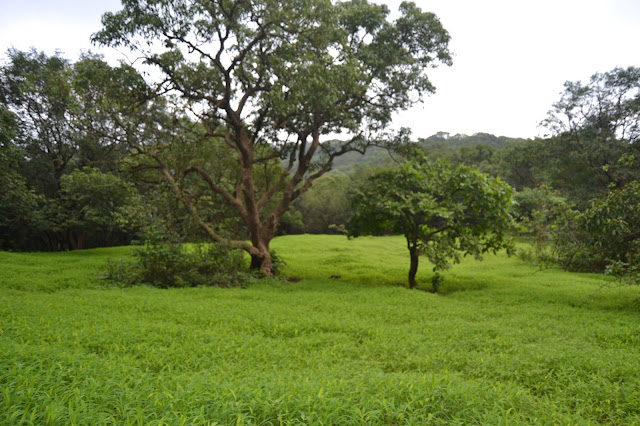 After a zillion breaks and a lot of dilly-dallying with my camera, we climbed the final rocky stretch to the top of the plateau. This is the moment that makes all the effort count. When you lie back on the soft grass overlooking the vast valley all the way to the Arabian Sea in the far horizon. With no rail or fence to separate you from the precipitous drop of 23,000 feet, take the ‘look-I’m-up-here’ selfie with some caution. 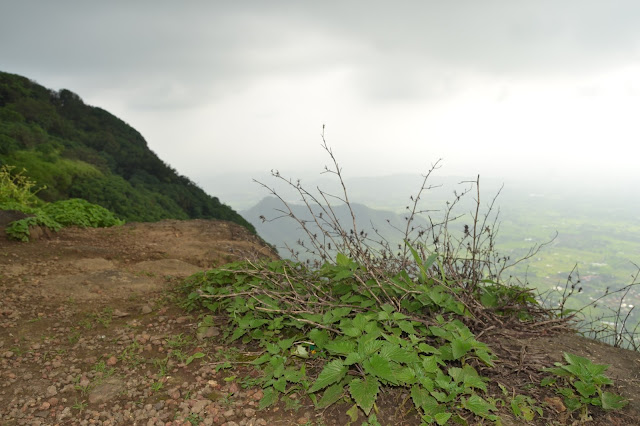 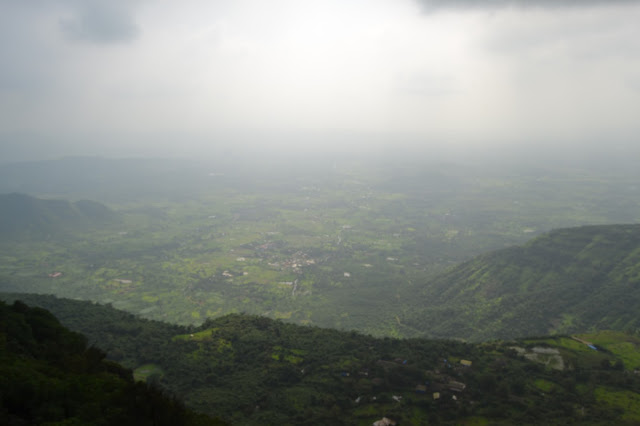 Unfortunately we could spend only half an hour at the top (and that’s why you should set out early). After a quick picnic of sandwich and wine we made our way down at sunset with the pink and orange light making even the most rugged rocks take on a softer sheen. 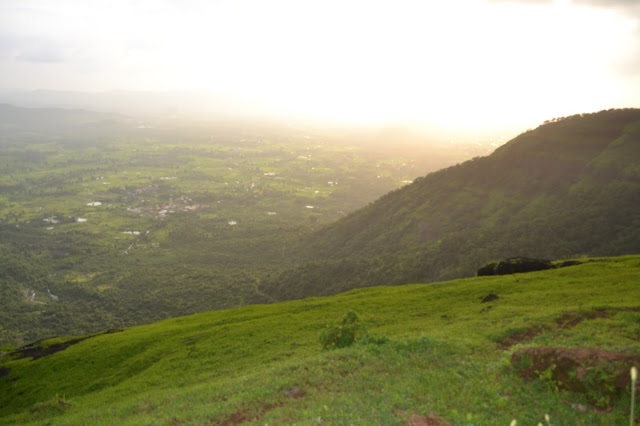 Things that I should’ve done but didn’t