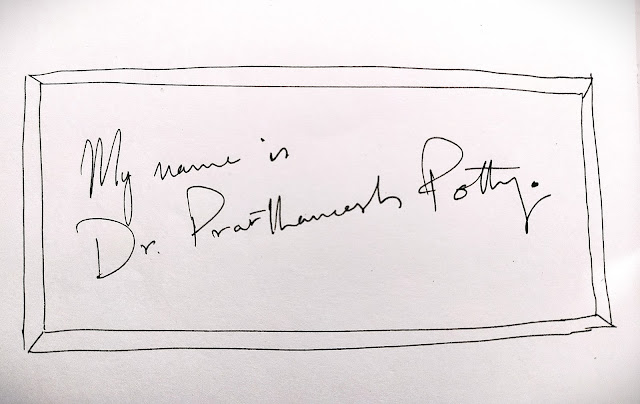 Professor Potty scratched these words on the blackboard, punching the period at the end for dramatic effect. He turned to face his class of forty. Forty miserable, clueless schmucks, most of whom didn’t know the difference between a period and an ellipsis. And yet they thought a minor in Creative Writing would be a piece of cake. An easy grade to brighten up their mark sheet.

He had overheard on his way to class, some of the students casually joke, “Next class…” proceeding to clutch their tummy and ejecting a fart-like sound from their mouth. The joke lacked half-a-decent punchline but regardless, the junior year would pick it up from their seniors, giving new life to a lame old gag.

Professor Potty did not have a sense of humour. At least, none when it came to his name. You would think after years of being tormented by friends, foes, colleagues, relatives, lovers and eventually his own children as well, the professor would at least pretend to smile and take the power out of the old Potty jokes. Instead, his defence mechanism was far more sinister.

Professor Potty plotted to seek revenge. The most harmless ones appeared on the marksheets – abysmal Cs and Ds and god-forbid an F if one laughed a tad too loud. It was a three-year course which gave him ample time to devise a plan and make them really, really suffer. Once in a few years, he even left a pile of potty in his own office to begin a series of witch-hunt among the rowdy bunch – terrorising them with authority till someone cracked and spilled secrets that involved girls or drugs. The original misdemeanour quickly set aside to make way for more serious issues that were reason enough for expulsion. And the management was only too happy to pat each other’s backs on removing yet another bad apple. But little did he know that he had finally come face to face with his match and she was sitting not more than five feet from him, alone in the front row.