I’m not much of a wildlife enthusiast. That’s not to say I don’t love animals. It’s just that I have very limited knowledge. For example, I cannot differentiate a cheetal from a sambar (haw!). If someone pointed out and said “Oh! Look! There goes a sambar” or “Look at that cheetal by the water hole”, I know they mean a type of deer, but the specifics end there. My literature on wildlife goes as far as The Animal Farm. But none of this kept me from travelling to the Ranthambore National Park (New year, 2014).

It’s a different story that Ranthambore was on my first of many other places that I travelled to on my month-long solo travel through Rajasthan. At the time I was living in Delhi. I was serving the last day of my notice period in office (Dec 30, 2013), when I was overwhelmed with this idea to just pack up and leave. With no new job prospects at hand, I consoled myself that the only perk of unemployment was time. And with indefinite amount at hand (unfortunately with a limited bank balance), I could easily afford to take my month’s break. But that’s another story....

An otherwise ordinary village in the Sawai Madhopur district of Rajasthan, Ranthambore is perpetually bubbling with the excitement of tiger spotting. Spread across 400 sq km (arguable) at the intersection of the Aravalli and Vindhya mountain ranges, Ranthambore used to be the hotspot for royal hunting games in the summer. Today it is a wildlife sanctuary famous for its Royal Bengal tigers. Stories of their territorial battles, love triangles, and characteristic birthmarks have been passed down by generations. With fresh anecdotes added every year, the Sawai Madhopur district was buzzing with talks of new sightings and old nuances of the wildcats. Now that we have a layman introduction to Ranthambore, let’s...

Cut to the chase

While Ranthambore boasts very many sightings of the jungle cat, forest guides and locals alike will tell you that, really (!) it’s all about luck. And my luck was already hard-pressed because of an unseasonal downpour the morning I stepped off at the Sawai Madhopur junction (take the Ranthambore super-fast Express, a mere four hour ride from New Delhi). You can book a safari with your hotel the moment you reach; or do an online booking through rajasthanwildlife.in.

To say that I was bursting with excitement is an understatement. In fact in my naive arrogance, I had already assumed that spotting a tiger was inevitable. After all, nearly everybody I met at my hotel (Ranthambore Palace) had seen one. Spotting a tiger in the wild seemed as easy as seeing one in the zoo. I believe that’s when I telepathically gave the tigers an upper hand at the chase. Just by underestimating them. 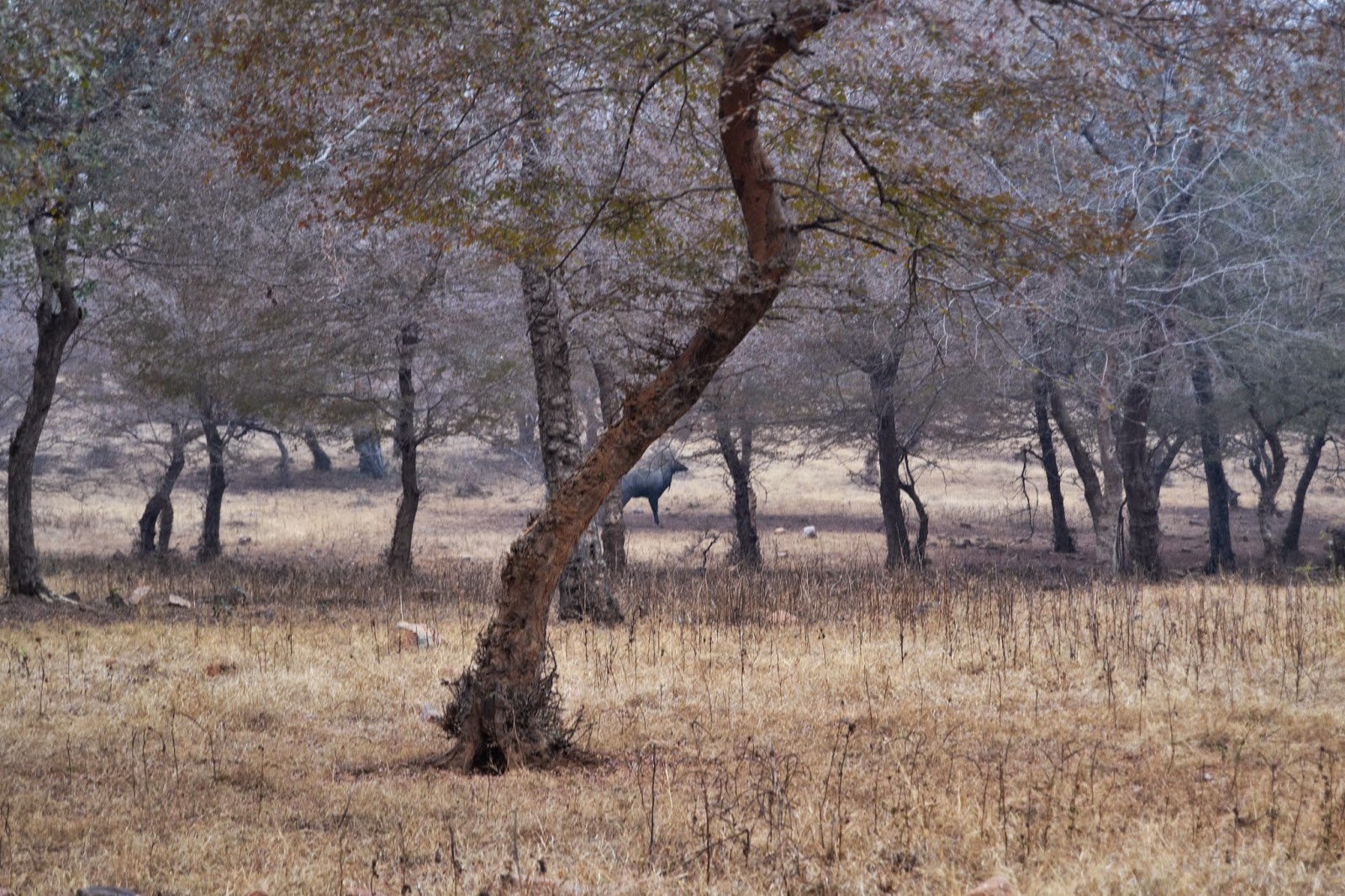 Tigers are territorial beasts. The size of their homes depends on the abundance of prey and ranges from 70 km square (females) to up to 100 km square (males). Accordingly the Ranthambore safari is divided into five core and three buffer zones. Zones 2, 3, 4 and 5 (especially 3 – Lake area) are popular for sightings whereas the buffer zones 6, 7 and 8 are great if you want a better lay of the land. While none of these zones guarantee sightings, choosing one knowledgeably only increases your probability. 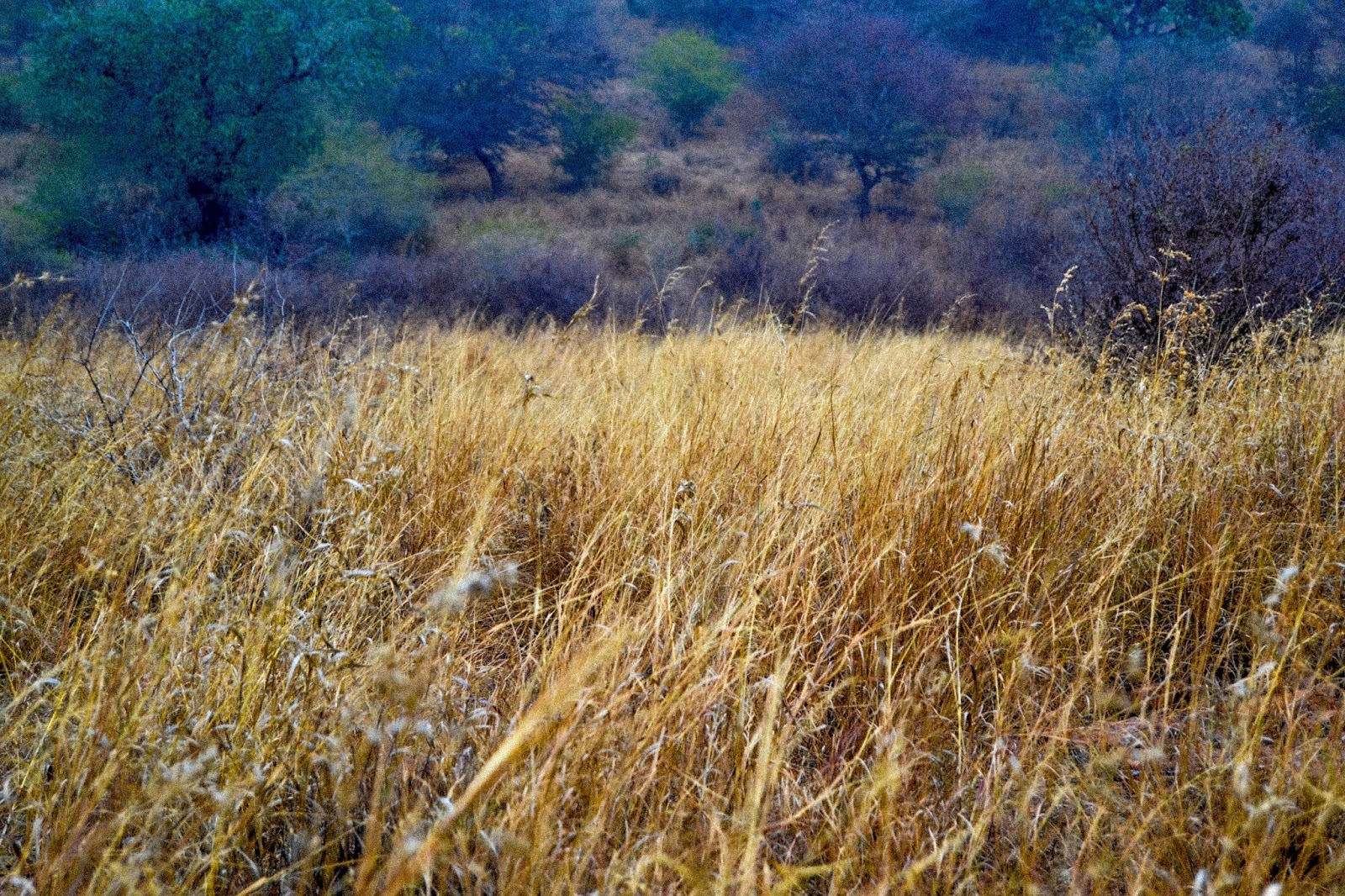 I had booked myself in a jeep (as opposed to the 15 seater canter) for the morning safari in Zone 3. I was travelling alongside a Danish family of five – young parents and three children who were all in their early teens. Going on a safari with three children in tow subdued my spirits somewhat. I couldn’t imagine a moment’s peace. Luckily for me, these children turned out to be the modicum of propriety.

All set, we were assigned a guide, and finally after an hour of dilly-dallying around the sanctuary office, we set out for the gates of the Ranthambore National Park. 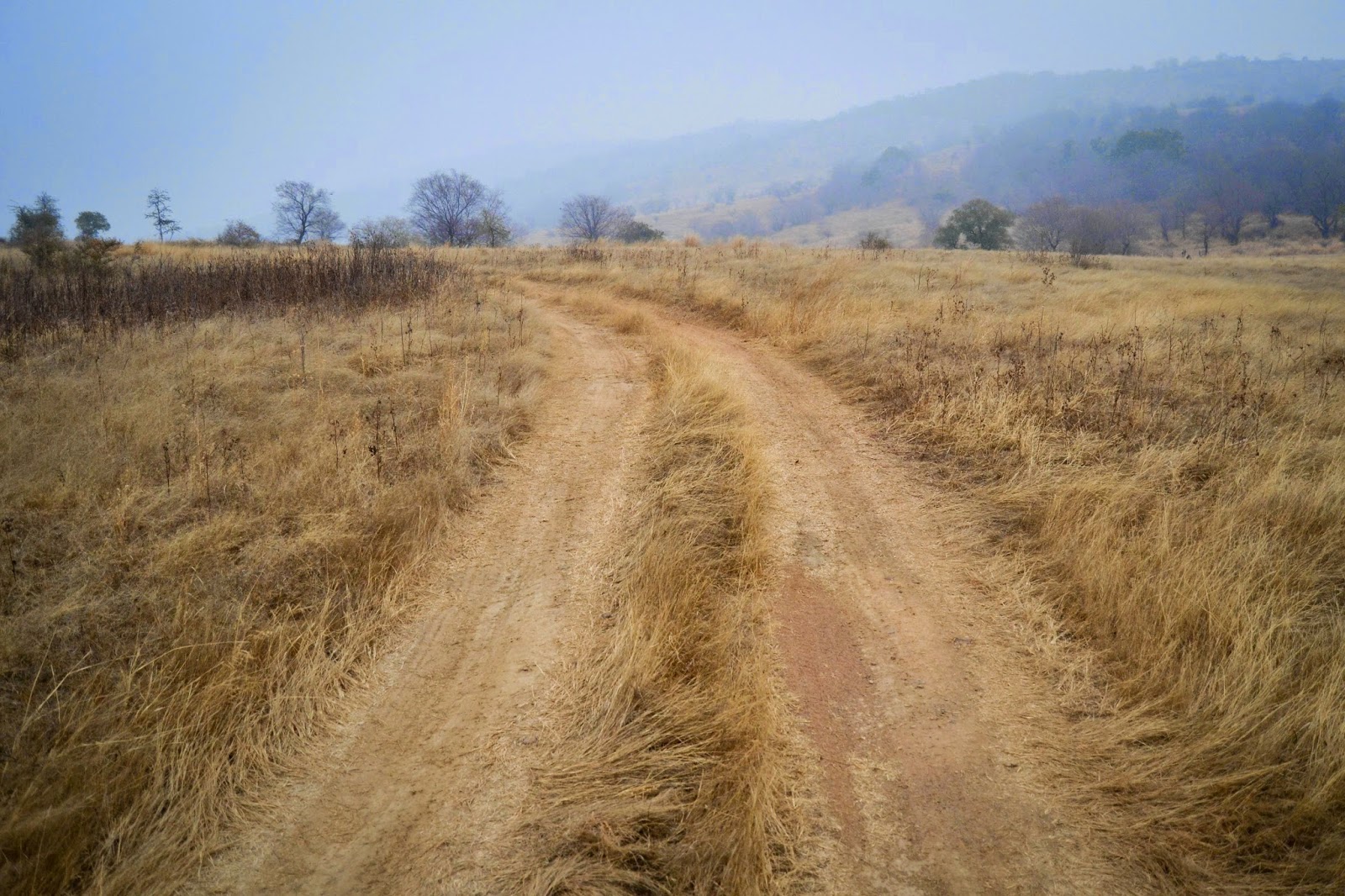 As our open air jeep hurtled down the mud tracks made by regular safaris, the cold December chill sent shivers down my spine. Cloaked in a misty eeriness, the deciduous terrain stretched in flat lowlands amidst the foggy Aravallis in the horizon. It was the perfect setting for a horror movie.

One of the biggest advantages you can have on a wildlife safari is a good guide. And thankfully, luck favoured us in this aspect. Mr. Laxman Rewari turned out to be a voracious English-spoken guide with an in-depth knowledge of the habitat. From the horse’s mouth; he belonged to a sheep herding family living at the fringe of the forest. With a childhood inundated by the perils of living so close to a core zone, Mr. Laxman was full of tiger tales from his village. 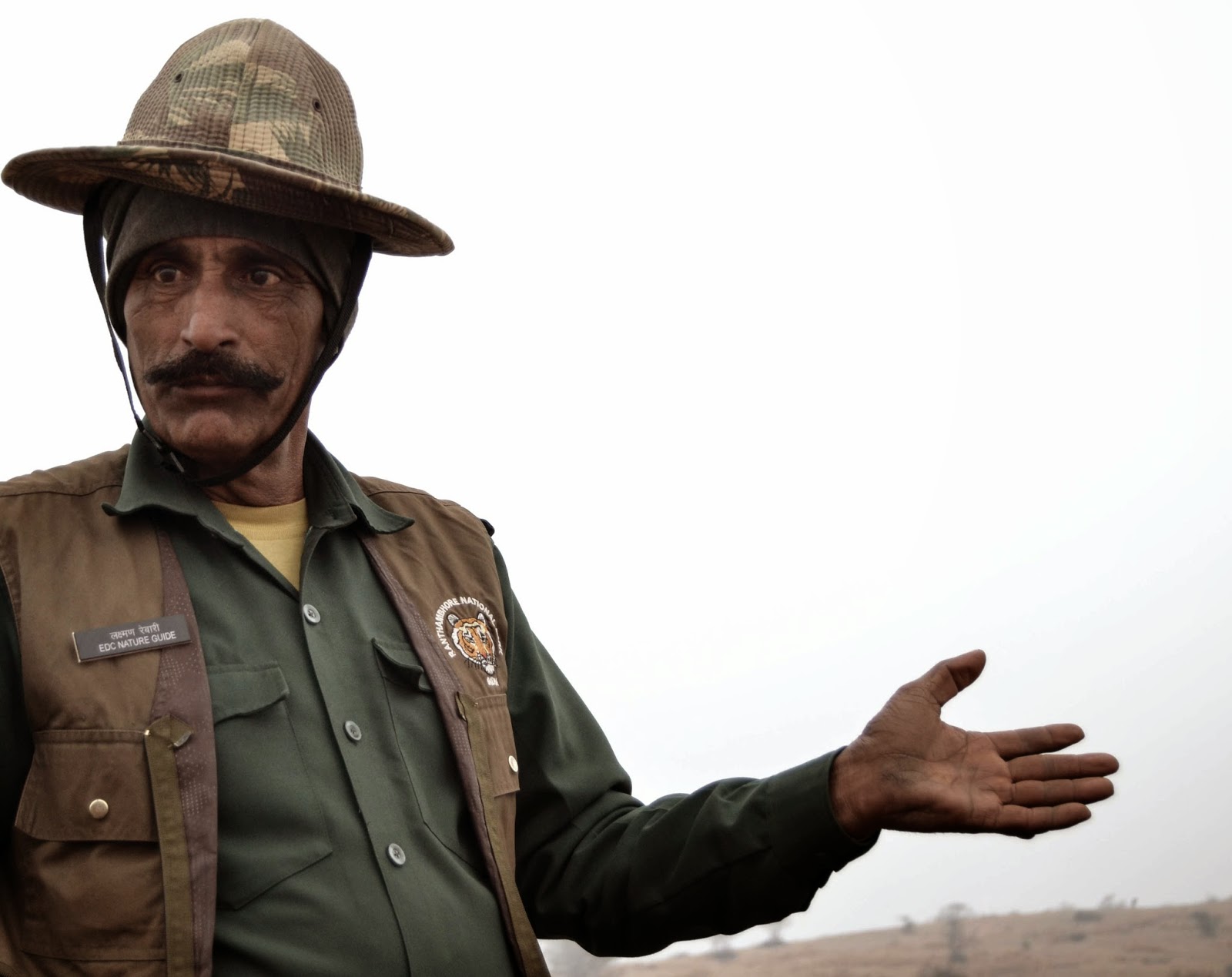 He warned us that a tiger sighting was probably going to be very difficult considering the recent rain. Like peeping Toms on a loud screechy jeep, we watched the relaxed wildlife scene unfold next to us. The ho-hum attitude of the sambars made for some amazing pictures (at which point I was dying for a decent telephoto lens). 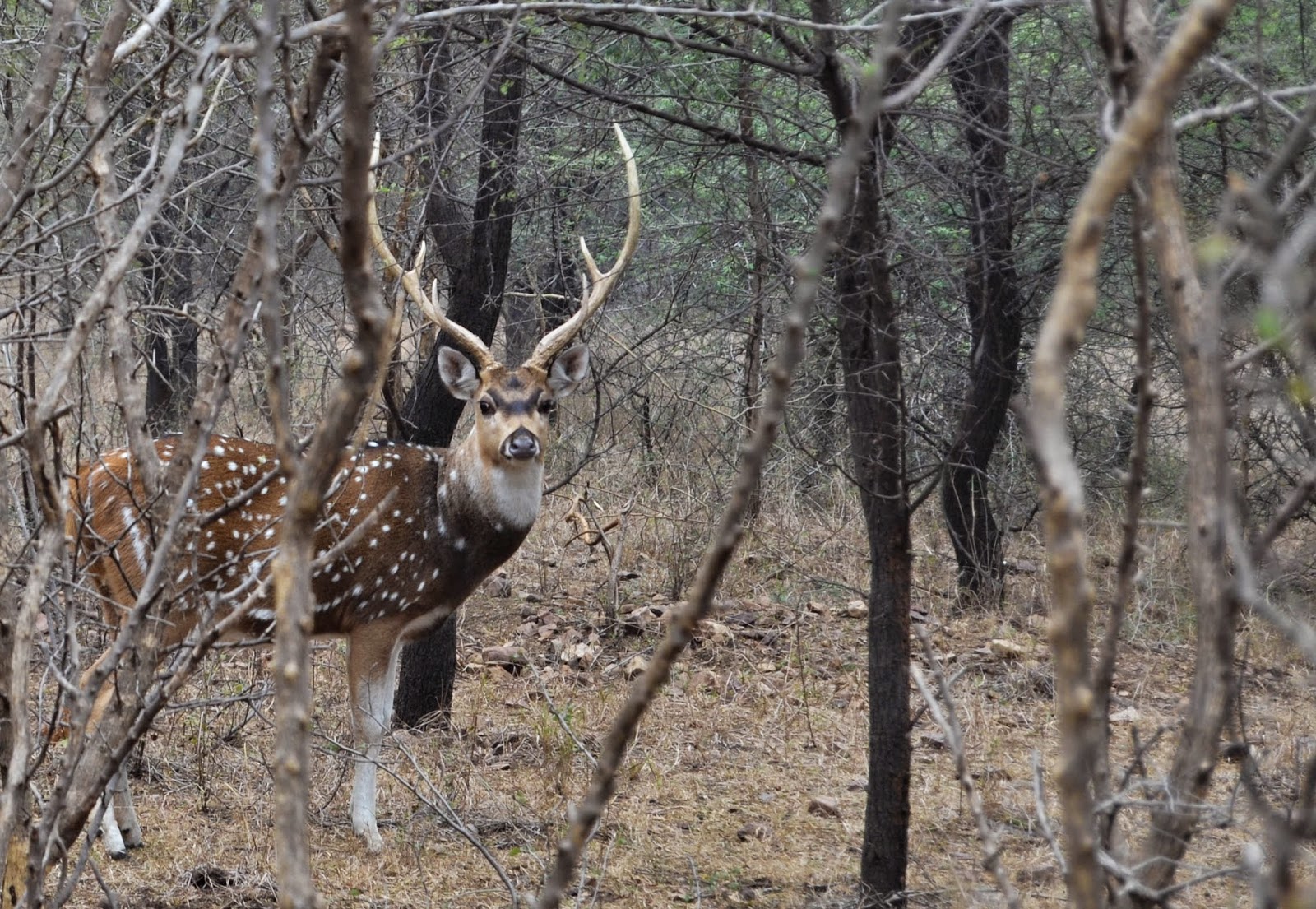 It wasn’t until the first forty-five minutes that we spotted a set of fresh pugmarks. And there the chase began. Mr. Laxman seemed to know exactly which way the tiger went. With a quick heads-up on the walkie-talkie to other jeeps in the vicinity, he co-ordinated all nine vehicles to drive in circles. Like an illusion egging us on, the pugmarks amounted to nothing more than blurry pictures and frayed nerves of excitement. I imagine the tiger was mocking us from a distance as we searched helter-skelter.

In the frenzy of tracking down a tiger, we did spot a family of bears. A mother with two cubs in tow frolicked down a slope, crossing our jeep less than fifteen metres ahead. They looked as harmless and as cute as the teddy I used to play with as a child. The reality wasn’t as fanciful. But our guide assured us that animals (including tigers) of Ranthambore were well accustomed to visitors and often seemed to pose for pictures too. We followed the pack for about a kilometre till they disappeared behind the dry auburn hedges. 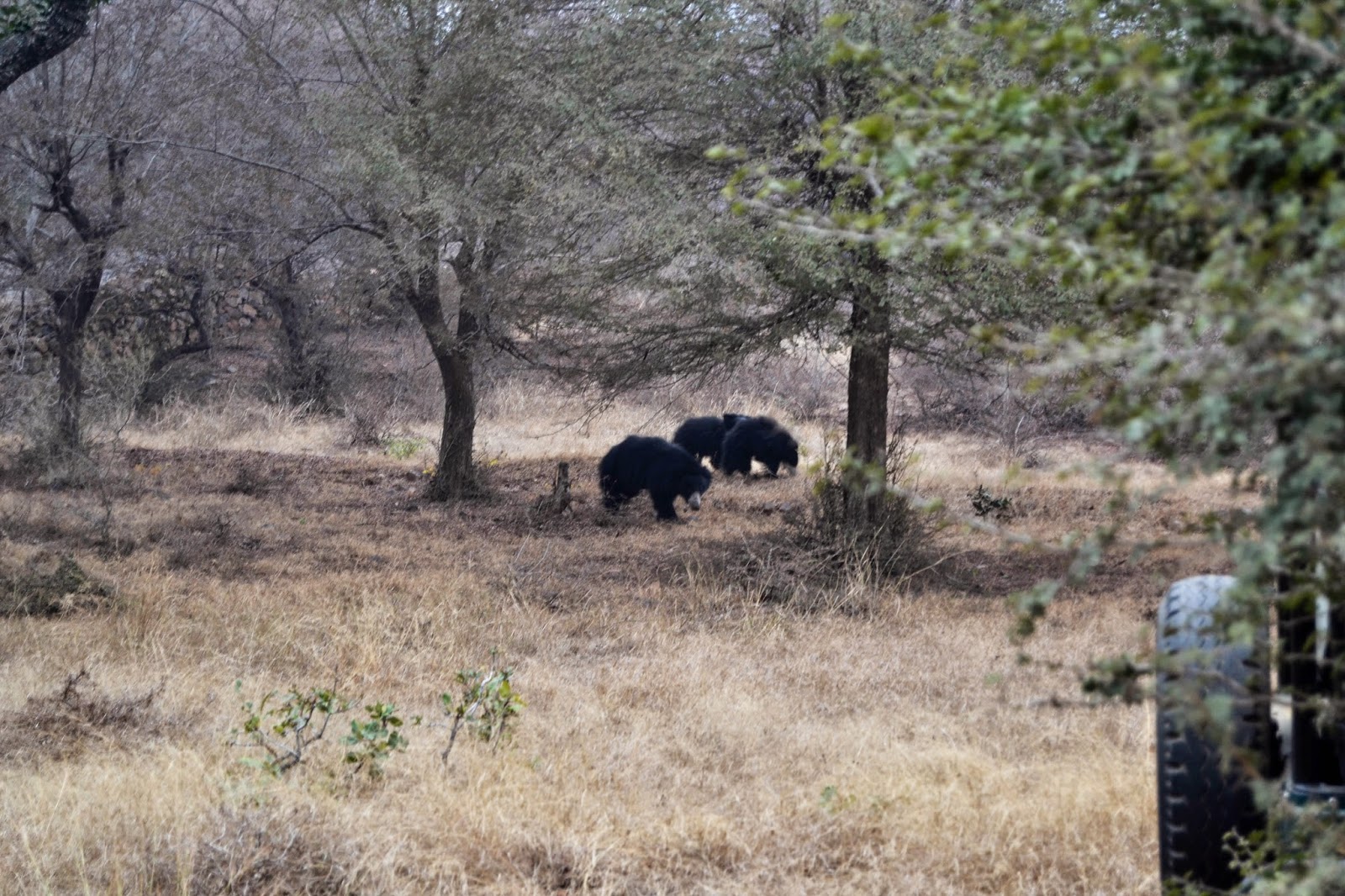 Crestfallen at our luck, I returned to my hotel. But my spirits lifted soon after. Be it the guard, manager, receptionist or a fellow traveller; everyone inquired whether we had any luck. They consoled us that bear sightings too were rare and quite a privilege. For the first time since I’d arrived, I accepted the fact, that indeed, the chase was all about luck.

The local folks were naturally the conversational types. In the next two hours, I learnt about the tigers’ eating and mating habits, who had how many sons and daughters – their whereabouts, who got preyed on and who saved who. It was like listening to them talk about their neighbours. Said with an air of nonchalance tinged with the pride of living amongst such royalty. 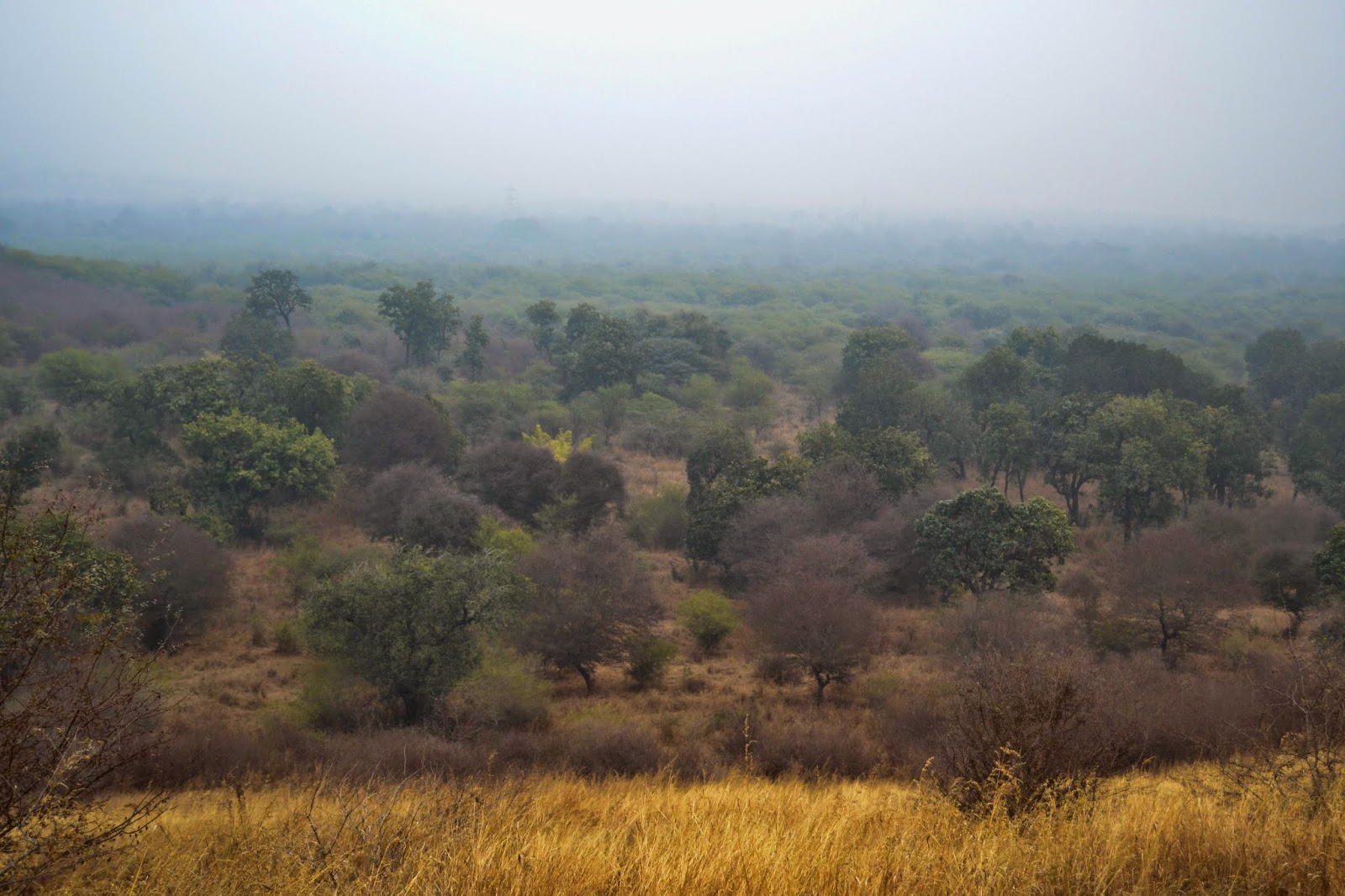 Ranthambore finds its place in folklores as a royal playground among British high personnels and the Maharajas of the erstwhile princely states of pre-independent India. Hunting game (and tiger falls under the Big Five game of Asia) was recognised and admired as a sport of courage and strength. 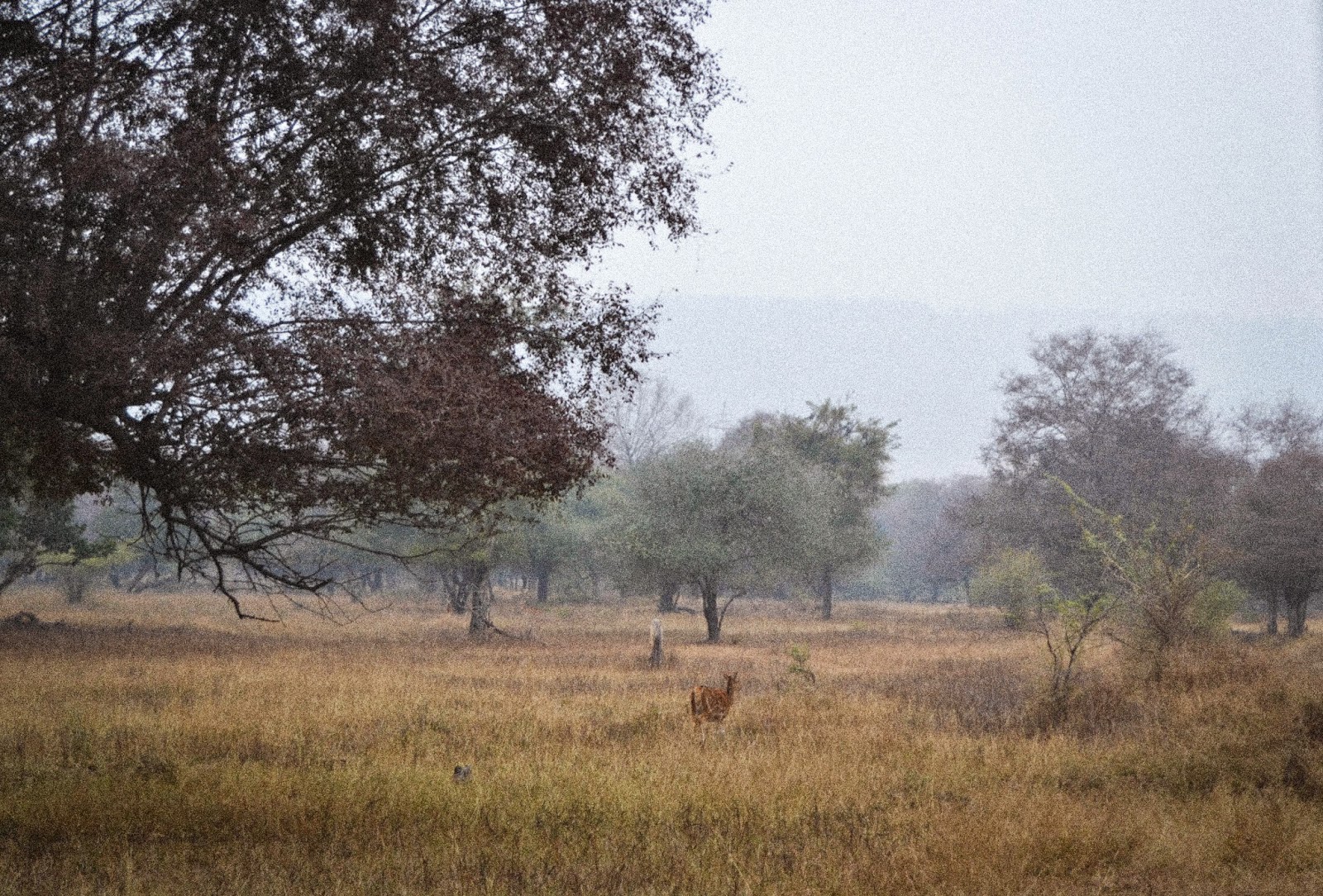 But dead beat and tired in the afternoon, I skipped the visit to the fort. While, this hardly seemed like a big deal at the time, considering I was going to see over a dozen forts and palaces in the month ahead. In retrospect it feels like a bigger miss. Not being able to put a place and setting to my musings of the royal game culture.

As the New Year's eve dawned on us, I went for a final late evening safari in zone 5. With no luck or logic on my side, I finally gave up.

What the day lacked in terms of thrill was made up for in the night of the New Year’s. The tiny guesthouse organised a small bonfire and music, and the manager ingratiated himself to the needs of its guests. I stuffed three miniature whiskies down my jacket to partake in the celebrations. There were Rajasthani music on the cranky stereo, the tandoor already cackling and the party high on laughter. Everybody had a laugh and a story to share. We didn’t care for names; we were simply travelers, riding on the high of the unknown. 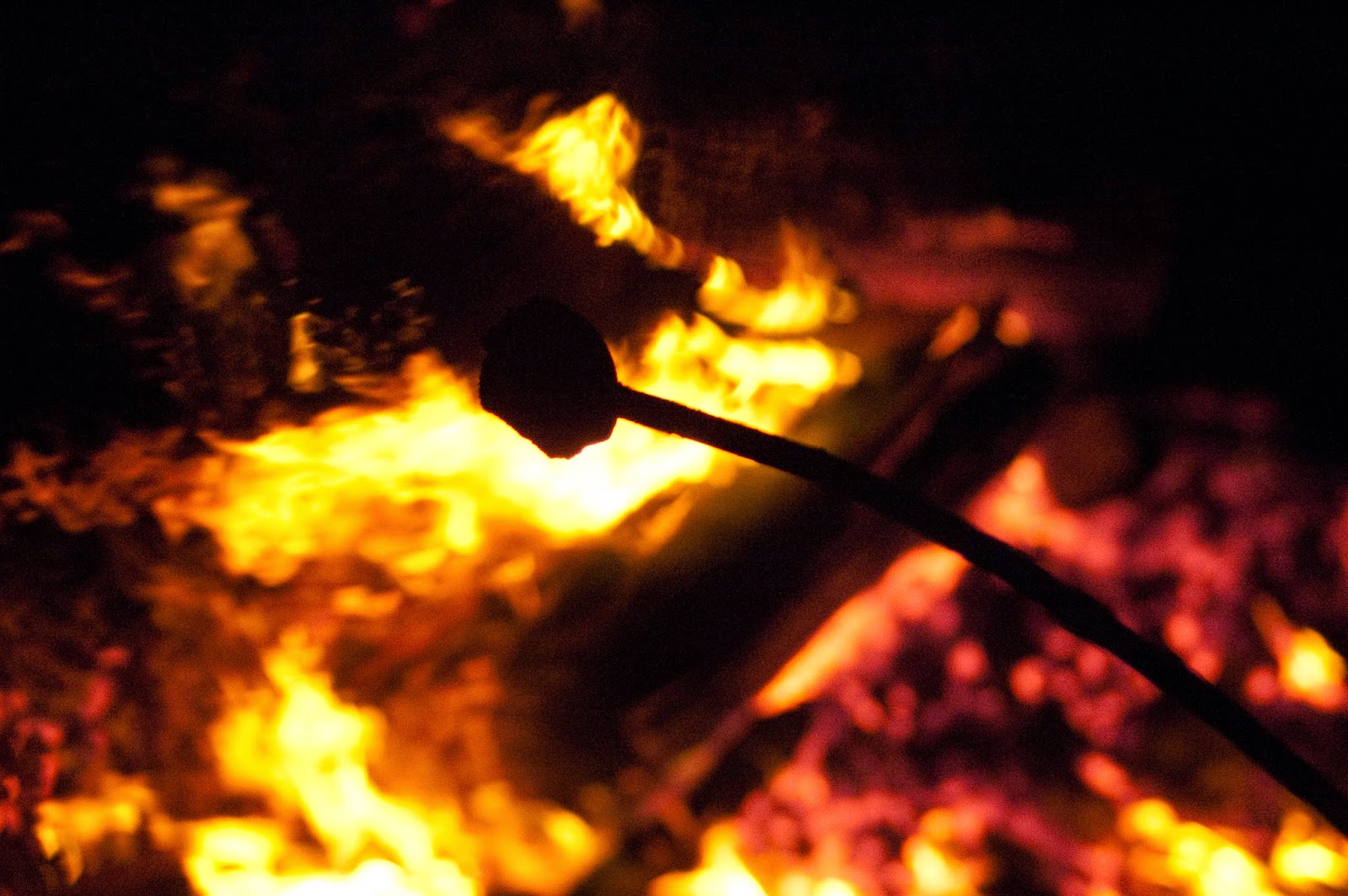 8. When losing is the same as winning

Amidst all the hoopla of sightings and the New Year, if there was one common thread of connection – it was the omnipresent enigma of tigers. Whether in idle conversations or heated discussions, the tiger was the single ubiquitous topic. Sitting by the bonfire, welcoming the New Year with strangers of the paradise, I never felt more in touch with the wild side. That in fact, in not meeting the tiger, I had made his acquaintance through the lens of others.