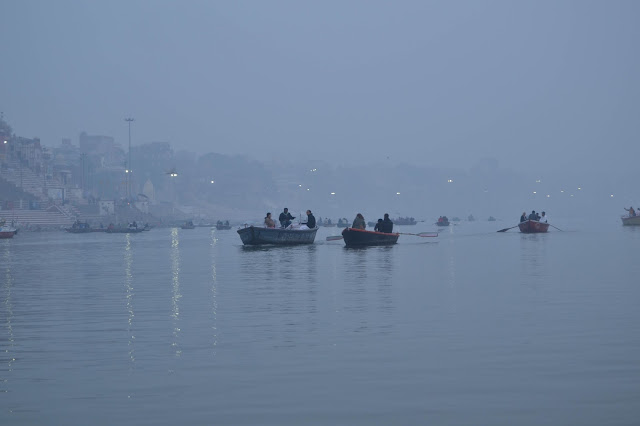 Whether it is praying or bathing, shaving, washing dirty laundry or mourning the dead; activities that are generally considered private happen in full public view in Varanasi. And the spectacle begins at the crack of dawn. That is Benaras or Varanasi or Kashi, if you may, the heart of Hindu India, with the paradoxes laid out in perfect sequence.

Located on the north shore of the Ganges, the city is bound by its two tributaries Varuna and Assi from north to south. And hence, the name Varanasi. Among the oldest cities in the world, this spiritual capital of India is a magnet for the devout and the devil in search of salvation. 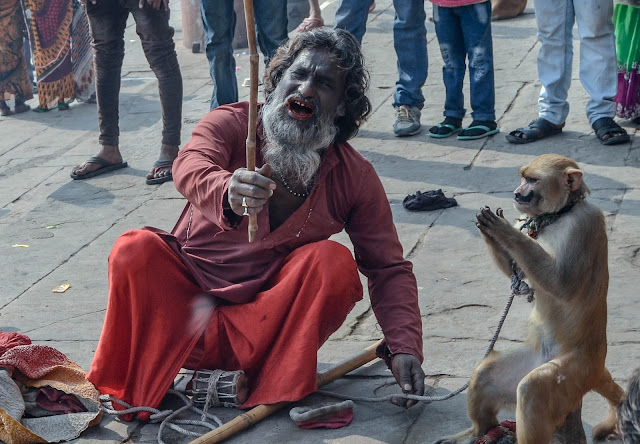 There’s the old sadhu with a crazy hairdo making monkeys dance and prance to his bidding; strange men in saffron willing to purge your soul at the going rate of Rs 300; European cafes and bakeries lining streets that smell of sun-baked urine; and a lot of barber shops for no apparent reason. As the dozen different stimuli reel through your senses, Varanasi could swing both ways for you. You might hate it and then grow to love it; or be awed by it at first till the magic wears down to a practical joke. Either ways it’s difficult to decide once Varanasi hits you like a psychedelic acid trip. 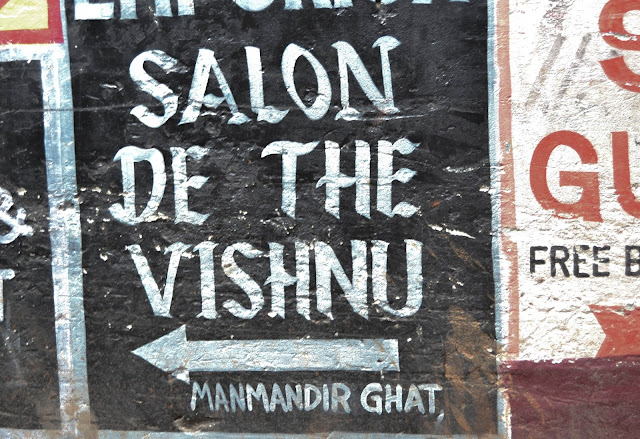 The sound of music on the ghats and galis

It’s five thirty in the evening, and Dasashwamedh ghat is already brimming with tourists and locals gathering for the evening prayers. In half an hour the priests would be appealing to the gods in a flamboyant spectacle of fire-bending and communal singing. A thick curtain of camphor smoke holds each observer in a restless wait for the salvation party to begin. 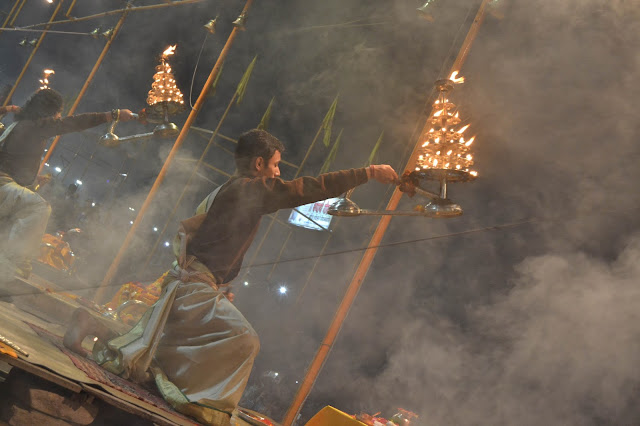 While the evening arati undoubtedly steals the limelight, if you listen more closely, the city has a rhythm of its own. It’s not uncommon to find groups of musicians on the ghats or holed up in some dingy attic jamming with their tablas, harmonium, sitars, violins and flutes.

Classical music echoes out of every corner. The music floats around like clouds of songs and all you have to do is stick your head into it, close your eyes and listen. It is in the temples, in restaurants where small weekly concerts are held, on the ghats and rooftops, in the larger festivals, in barber shops and guesthouses. The notes to which virtuosos like Pandit Ravi Shankar, Pandit Gopal Mishra, Ustad Bismillah Khan, and Girija Devi grew up to.


A taste of everything

Varanasi loves milk; from sweet curd (mishit doi) to rabri to malai to thandai to a zillion other sweetmeats whose names I cannot recall. And then there’s everything else - something to please even the finickiest of palates. From drool-worthy kachoris served with aloo rassa and jalebis (try Madhur Milan close to Dasaswamedh ghat) to chilled lassis in exotic flavours (try the pomegranate one at Blue Lassi in Kachowari Gali) to authentic kimchi and glass noodles (in the Korean joint called Bona Cafe in Bengalitolla road) to home-grown Italian food using fresh mozzarella from Varanasi’s famous buffalo milk (in Vatika Cafe at Assi ghat). Chaat stalls and bakeries selling croissants and bagels, stand side by side in perfect harmony. 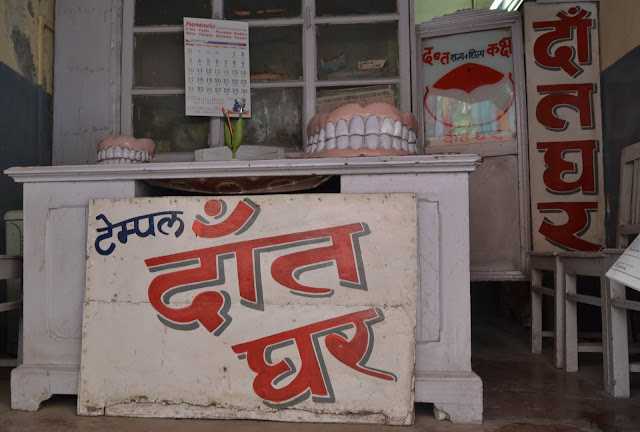 To understand Varanasi’s eclectic taste in food, one only has to look to the city itself. A place where thousands of pilgrims throng to offer their prayers (mostly food) to the Shiva, there’s bound to be good food. Despite being a city of north India, the continuous flux of people from all over India and abroad over the decades has seen Varanasi take influence from South Indian, Gujarati, Maharashtrian, Bengali as well as Oriental cuisines.

Mr. Ansari unceremoniously crumples a cobalt silk saree and forces the delicately embroidered cloth through a silver ring and grins triumphantly, “See! Pure silk. You can only pull natural fabrics through this ring – never synthetic.” The Benarasi silk has been a byword for sartorial elegance for centuries. Even the Buddha was laid to rest veiled in a brocade of hand-woven silk from Varanasi. In the dark weaving houses of Madanpura, skilled craftsmen sit for hours weaving microscopic strands of silk into intricate designs. Sometimes a saree could take 15 days and sometime nearly six months; depending on the elaborateness of the embroidery. 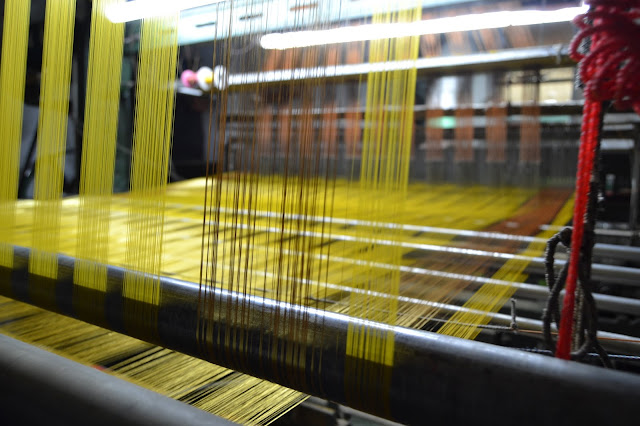 What you see at first sight often requires a second look

The riverside bazaars with its narrow roads and thousands and thousands of shops, the inevitable accretions of a city that had been the heart of the pilgrim’s India for several thousand years, cannot accommodate even as small a vehicle as a rickshaw through its winding alleys. Dodging past beggars and cows munching on garbage, ignoring hawkers, avoiding the red spittle of the shopkeepers; and then suddenly the curtain of chaos lifts to reveal unexpected oases of calm. 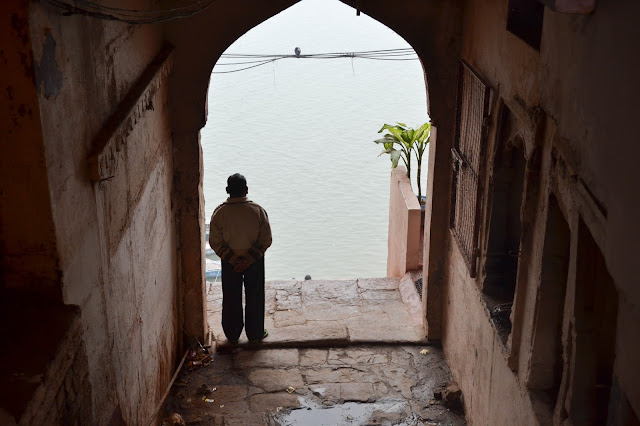 While the cymbal clanging – bell tolling - evening arati attracts much attention; it was the morning arati at Assi ghat that made an impression on me. At five thirty, the day begins in the shadows of the night at Assi ghat. High priests clad in their uniform dhotis blowing conches and brandishing fire, like a beacon of faith on the banks of the Ganges. You could stick around at Assi ghat for the half an hour session of yoga or take a morning boat ride, cutting through the river spangled with candle-lit flower bowls as the sun rises over the far horizon. 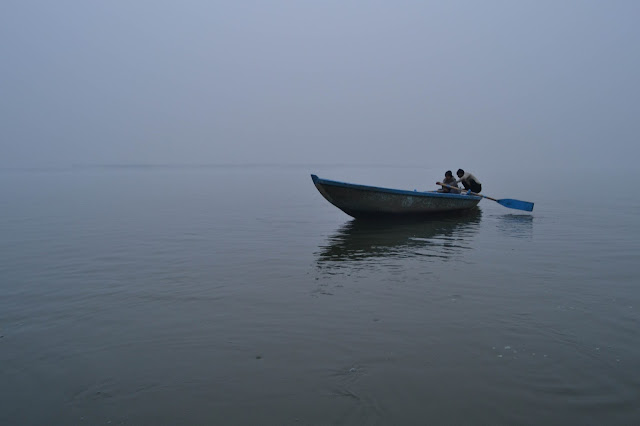 The scent of dead

It was late in the afternoon and I was aimlessly walking through the bazaar around Vishwanath Temple. I had no destination in mind – I was willing to go wherever the road took me. But had I known that I was walking towards the cremation grounds in Manikarnika Ghat I might have stopped to overthink it. Manikarnika Ghat is a place where death is dealt with - in a dispassionate, impersonal griefless manner. The dead are ferried on bamboo stretchers to the ghat by men chanting ‘ram nam satya hai’. The cost to hire a priest to perform the last rites, the wood, the clarified butter for ignition (or salvation) must be bargained at the going rate. The dead wait in line, covered with a shiny golden cloth. Each one is allotted a slot of three hours, assuming the families bought enough of wood to finish the job. As the relatives watch their dead burning, chaiwallahs take this opportunity to do the rounds selling tea to the spectators in earthenware cups. 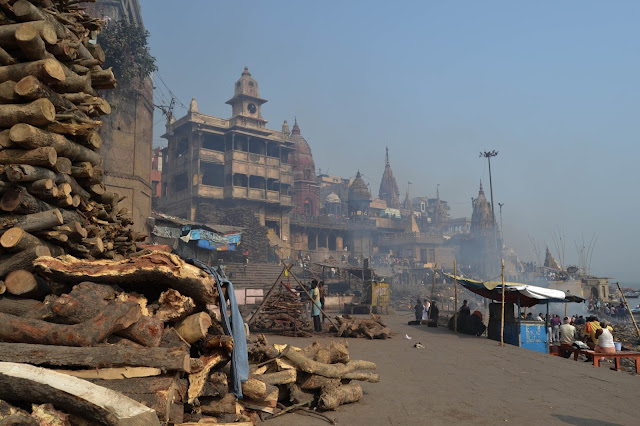 PS
Stay in one of the guesthouses with rooftop cafes along the ghats. I found Sita Guesthouse on Chausatti Ghat perfect with most of its rooms facing the river
Varanasi is also famous for its stones and beads. Take a rick towards the cantonment area where most are sold in wholesale
North east of Varanasi, roughly half an hour in an auto or taxi, is Sarnath where presumably Buddha delivered his first teachings. The campus houses a temple complex as well as the famous stupa and a fine museum. Hawkers selling beads line the roads around the campus. And if you’re looking to stay the night, the Tibetan Monastery is a viable option